Edited and prepared for the Internet by Ronald Davis

Roseman's landscapes, which constitute a major part of the artist's oeuvre, express a deep feeling for nature and complement his ''profound interest in the human condition in portraying different kinds of people, professions, social or artistic groups'' (Bibliothèque Nationale de France).

Roseman paints and draws landscapes en plein air in the four seasons. The artist writes in his journal:

"Spring, summer, and fall can be very pleasant times of the year to be at my easel or with my drawing book on a grassy hillside or in some secluded valley. But when the North Wind brings ever colder days, I willingly endure the cold for the inspiration that also comes from painting and drawing en plein air in winter.''

On an early morning in December 1987, with distant Alpine peaks silhouetted against a golden light of dawn and a blue-gray mist ascending the hillside where Roseman stood at his easel, he painted December Morning - View from Chardonne Overlooking Lake Geneva (Matin de Décembre - Vue de Chardonne sur le Lac Léman), seen above. The breathtaking view from the Swiss village of Chardonne, on Mont-Pèlerin, takes in a panorama of the eastern end of the great lake, the awesome peaks of the Dents du Midi, and a range of the Savoy Alps.

A month after Roseman painted December Morning, the Chief Curator of the Museums of France, François Bergot, who praised the ''very beautiful landscape,'' acquired the painting for the Musée des Beaux-Arts, Rouen, of which he was the Director. Monsieur Bergot had previously acquired for the Rouen Museum, Roseman's work on the monastic life, including "two very beautiful drawings," and the portrait painting Dom Henry, 1978, of which the Chief Curator of the Museums of France also expressed in letter "my admiration for this work imbued with insight and spirituality.'' (Dom Henry is presented on the page "Correct Usage of the Word 'Monk.' ")

"On the steep mountain slopes in the changing seasons, I worked in solitude save for the occasional company of a fox, with inquisitive eyes, who ventured out from the woods or the plaintive cry of a lynx in whose territory I had unknowingly set up my easel and where I stood painting for hours in the invigorating Alpine air.''

2. Stanley Roseman hiking up an Alpine path to paint his landscapes, spring 1988.

3. The artist at his easel in an Alpine pasture above Lake Geneva, spring 1988. Roseman's paint box, placed on the crossbars of his portable easel, serves as a worktable for his brushes and jar of turpentine. By his side are a travel bag of art supplies and boxes for transporting his panels and the finished paintings.

"The morning sky was silver gray when I left the chalet in Chardonne. I packed the car with my paint box, portable easel, panels, and travel bag of art supplies, as well as a thermos of hot coffee, and headed east towards Montreux, exited the highway, and started the long drive up the mountain. I returned to the pasture where I had painted several landscapes the previous spring, including Spring Evening - View of Mont-Pèlerin and Lake Geneva, acquired that same year by Monsieur Bergot for the Musée des Beaux-Arts, Rouen. That high mountain pasture above Lake Geneva was again to inspire me for my paintings."

"Absorbed in my work, I hardly noticed the first snowflakes drifting gently down. Painting with oil colors on panel rather than on canvas enabled me to continue my work as the snow fell in great abundance. It was inspiring to be there painting on the Alpine slope, to capture the spring snowstorm laying a beautiful white mantle over the pines and veiling the woodland farther up the mountainside.''

Roseman eloquently transmits the visual sensation of falling snow. Broad, calligraphic strokes of the brush loaded with creamy white paint render the snow covering the ground and pine boughs. Thin glazes of pigment describe gusts of snow ascending the steep Alpine slope and enveloping the wood as more snow falls from above. Delicate lines of a fine pointed brush and dabs of white and accents of dark brown and maroon define the bare branches being covered with snow.

Roseman's landscapes are a synthesis of the artist's direct observation of nature and his deep feelings and personal expression in the creative process. The dramatic composition of Spring Snowstorm is divided into three distinct but unequal segments: the rising, snowy foreground; the expanse of woodland advancing and receding in the middle distance; and the sky, whose diffused light permeates the painting. Through the snowy mist the trees take on fascinating silhouettes, while undertones of pale ochre warm the cool, silvery gray sky.

© Stanley Roseman and Ronald Davis, 2014 - All Rights Reserved
Visual imagery and website content may not be reproduced in any form whatsoever. 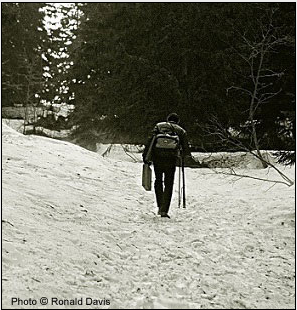 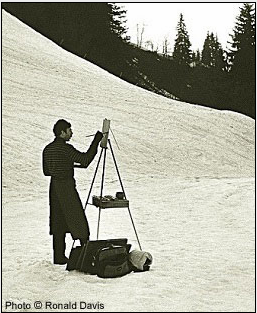 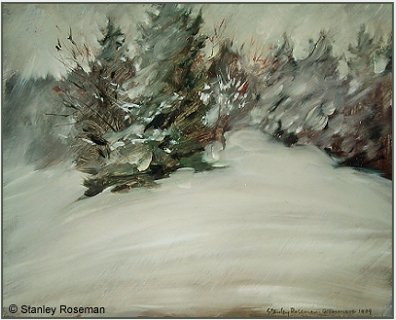 Additional selections from the artist's journal
on painting and drawing landscapes will be forthcoming.

Homage to my Father Bernard Roseman

My First Days of Drawing the Dance at the Paris Opéra

"Line is the essence of a drawing.''

At the Circus - My Friendship with Frosty Little

Correct Usage of the Word "Monk''

An Invitation to Draw at the Metropolitan Opera